The Resurrection of Jesus and Hope 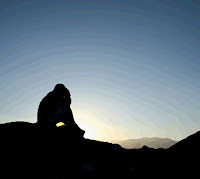 A world without Hope
If we are alone in the universe, if there is no God, if there is nothing but matter and energy, then Richard Dawkins is probably right:


"In a universe of electrons and selfish genes, blind physical forces and genetic replication, some people are going to get hurt, other people are going to get lucky, and you won't find any rhyme or reason in it, nor any justice. The universe that we observe has precisely the properties we should expect if there is, at bottom, no design, no purpose, no evil, no good, nothing but pitiless indifference.”


A world that shows us "pitiless indifference" is a world in which there is no hope. We are born, we die, we rot - and that's the end of it.  So Eat, Drink and be Merry, for Tomorrow we die.
YOLO.

From Resurrection to Hope
But how does this work? How can the resurrection of one man 2000 years ago lead us to hope today? Here's the journey....

#1: The Resurrection of Jesus proves that God intervenes in the world
There is no other way to explain the resurrection of Jesus Christ than to say God intervened in the world to bring a rotting corpse back to life.
There is in science, in point of fact, nothing to say that miracles like this can't happen. Natural law is the normal way God runs his universe, but there is not one line in science that precludes miracles.
Does God ever intervene in our world, we wonder? Is he at work in the world of men and women? Can he intervene in my life? Yes, declares the resurrection in a powerful way.
That one empty tomb signals a thousand and one other God-interventions.

#2: The Resurrection of Jesus gives authority to all of his other life-giving words 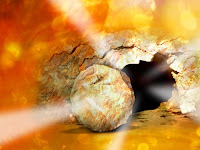 Perhaps the greatest test of any man's authority lies in the predictions he makes about the future. Experts like a former IBM chief predicted that the world would only need  about 5 computers! And Bill Gates once predicted that no-one would need more than 640K of memory space on a computer! Both wrong. Big time wrong.

#3: The Resurrection of Jesus signals that our sins have been paid in full
Strange leap this one, you may think. But God's just punishment upon our wrongdoing is death. God in his love sent his Son to die that death for us, to take that punishment that we deserve. And so he dies. But how do we know when or if the sentence upon him has come to an end? When he has un-died, when he has risen from the dead. And so the resurrection is the signal that all of our sins have been indeed been paid in full and we are forgiven!

Can God do that in your life? Yes he can. Whatever the valley.

The question is whether or not we will believe the Victor?
Posted by roysummersblogspot at 19:32 2 comments:

The Folly of the World's Thinking

An easy mistake
It is an easy mistake  for a Christian to make: go to the library or a reliable secular website when they need a book on marriage, bringing up the kids, depression, whatever. We have been conditioned to seek information in this way.

But this is a fatal mistake for a Christian to make for one big reason......

The world has messed up its thinking
According to Scripture, unbelievers can't think straight.  The moment a man or woman suppresses the knowledge of God, they mess up their mental apparatus. This is how it works. Out there in the world of creation there are numerous evidences for God. Complex things demand a Designer; beautiful things demand a Painter; immense things require a Power. Inside our heads we have been supplied with a mental apparatus which works out cause from effect, all very naturally. Put these two together and the mind inescapably comes to one conclusion:

Evidence from Creation + Internal mental "cause and effect" reasoning => GOD

Today we are spoilt for choice when it comes to evidence from Creation, there is just so much of it. 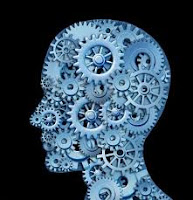 Now, if a human mind suppresses this normal cause and effect  process, when it comes to creation and God, it messes up all the reasoning of that human mind.

This is not at all surprising - if a man makes such a big mistake in his reasoning at such an obvious point, how can he think right anywhere else? If he does the first button of his shirt wrongly, how can he expect the rest to be right?

This is what the apostle Paul teaches in Romans 1. The human mind that deliberately denies the massive and inexcusable evidence of God's existence simply can't think straight on anything else:

"....their thinking became futile and their foolish hearts were darkened."

This, sadly, of course does not stop them from thinking they are wise:

"Although they claimed to be wise, they became fools."

But this teaching of Paul's, that a mind which denies the existence of God knocks out all of its reasoning processes, has very large implications for all branches of human knowledge (I am here referring to secular studies).

Does that mean that everything an unbeliever says is wrong?
No, because 'common grace' teaches that God preserves some truth in the world (this world is not hell) so that Paul can quote from pagan thinkers in Acts 17, approvingly. The least 'corrupted' truth is likely to be found in hard subjects such as physics and chemistry where the subject is matter, rather than God, man or morality.

Much truth will be distorted
But the moment the world begins to talk about God, morality, or human beings, we are to be completely suspect of all its teaching. Common grace means the world will sometimes stumble upon truths even in this area. John Gray in Men are from Mars, Women are from Venus, for example, stumbles upon the fact that there are some real differences between men and women. But we could not trust secular thinking on the history or origin of the world, right and wrong, sexuality, the future, the supernatural, miracles, and so on. In all these areas its thinking will be foolish.

The Bible or Christian books
The place to go for all these matters is the Bible and to Christian authors. We must teach our churches and children to have a healthy mistrust of everything taught at school or university. It may appear wise, but it is, in point of fact, foolishness. And we must continually renew our own minds with God's truth:

"Do not conform any longer to the pattern of this world, but be transformed by the renewing of your mind." (Romans 12:2)

Posted by roysummersblogspot at 09:39 No comments:

roysummersblogspot
I am the pastor of a Christian church in Worcester, England.