Why were the Salvation Army Successful?

The Poor in the Victorian Age

I have no idea where the Salvation Army are today, but when they started, they were Gospel people led by a fiery Gospel man.

William Booth estimated that of the 30 million people living in Victorian England a good 10%, or 3 million, were poor. By poor he did not only mean "no money" - a very limited view of "poverty". The poor were not only materially poor, they were spiritually poor: they were without God and without hope. And Booth understood that it was impossible (and unwise) to separate both kinds of poverty.

In Booth's mind material poverty itself went much further than money: the poor were in every way poor. Crime, homelessness, addiction to alcohol, grime, illness, were all bound up together in this forgotten 10%. He knew that sin and poverty very often go togethe:

"Their vicious habits and destitute circumstances make it certain that, without some kind of extraordinary help, they must hunger and sin, and sin and hunger, until, having multiplied their kind, and filled up the measure of their miseries, the gaunt fingers of death will close upon them and terminate their wretchedness." (all quotes from "In darekest England and the way out")

Can you imagine that truthful - but perfectly politically incorrect - assesment being said by anyone today?

Few people, including the state, were doing anything effective for these desperate and poor people.

What did Booth do?
William Booth called together an army of Christians to help this destitute poor, "Now I propose to go straight for these sinking classes", he declared. He found them homes, found them employment, visited them in their distress and most of all.....

.....shared the Gospel with them. He was convinced that life in Christ was a poor man's only real hope:

"My only hope for the permanent deliverance of mankind from misery, eithe rin this world or the next, is the regeneration or remaking of the individual by the power of thr Holy Spirit though Jesus Christ.."

Every evening these folk would gather together for 2 hours and sing, hear testimonies and hear short good preaching. EVERY EVENING.

First, they knew that unless a man is put right with God through Jesus Christ good works are of little long term value to him. Put a drunkard in a nice house, give him a job, and money, and within a few months he'll be back in the gutter. Only the Gospel can change a man's life (starting on the inside).

Second, Booth knew that caring for a man's material needs paved the way for him being opened to the Gospel. The practical help given was never an end in itself but always a means to an end, that these people would be able to hear of the love of Jesus Christ.

Third, Booth shared the Gospel with them EVERY DAY. This is how lives are transformed, not by once a week, but by every single day being among God's people, hearing God's word.

So, in the end, Booth's Salvation Army turned out Christians: and that was the key to his success, nothing more, nothing less.


Posted by roysummersblogspot at 09:34 No comments:

This one vast sin
Not surprisingly, the first sin ever committed by anyone in the human race ran deep and wide. Because of that one sin we all became sinners, mysterious though that seems - and sounds. 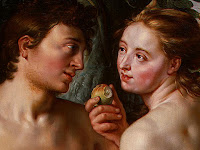 The more you consider Adam's sin, however, the more you see the failure of so many husbands and the temptation of every husband, and every wife.

The key to understanding this aspect of the first sin is in Genesis 3 verse 6 which tells us that Adam was there when the serpent spoke to Eve, he was watching, he could have stepped in. He didn't.

In this blog I want to examine the gender-bending nature of this very first sin....

Gender-bender sin
Adam's first sin? I thought it was Eve who sinned first! No, says Paul in Romans 6, sin came into the world through one man, Adam, not through Eve; that, as we shall see, is the point. So what happens?

(1) Eve is beguiled by being spoken to
First of all, Eve is flattered by the mere fact that the serpent addresses her. Satan has done this on purpose, of course. He is trying to turn upside down  God's design - men are called to lead the home. Eve is absolutely flattered that the serpent should address her rather than her husband.

(2) Adam is impressed with Eve's clever talk?
Adam, who is head over heels in love with the gal, is so impressed with the cleverness of his wife, that he completely overlooks what is goin' on. Why doesn't he step in and correct her wrong thinking and wrong speech? After all the word of the Lord about the trees in the Garden came to him, before Eve was even around: he knew better that Eve what God had said. Why didn't he step in when the serpent spouted error and then his wife spouted errors?  Was he overawed by this clever gal? Blinded by brains?

(3) Adam and Eve both transgender roles
The end result is what? Eve does what Adam should be doing - she leads the whole show, from temptation to eating. Adam does what Eve should have been doing - follows. In the end it was all Adam's fault, "Because you listened to your wife..."(3:17).

Husbands and Wives today
Adam's sin is still every husband's temptation. When his wife is going astray, instead of correcting her, and thereby demonstrating that he is her best friend, he just 'lets it all happen', 'can't be bothered'. Perhaps for many years she has got her way by throwing a wobbler and now he's just too weary of fighting. And Eve, instead of saying to the serpent "You're talkin' to the wrong person, speak to my husband", is flattered by assumed leadership and takes Adam's role.

Every Christian marriage should aim at reflecting the pattern and beauty of the Great Marriage between Christ and his Church. Christ leads his wife gently - but firmly (read the early chapters of Revelation), and his wife is called to follow her Lord respectfully and lovingly.

When this happens the world sits up and notices both love and respect, and children born into such a family are given the best start and example for their own future marriages.

Posted by roysummersblogspot at 11:51 No comments:

roysummersblogspot
I am the pastor of a Christian church in Worcester, England.