The Devastating Effects of Lies

The Eighth Commandment
In almost every culture there is an understanding that telling lies about people is a bad thing. But in cultures shaped by the Judeo-Christian consensus lying takes on a graver tone of seriousness, because Jesus called himself The Truth, and the 8th commandment says "You shall not bear false witness against your neighbour."

The case of Carl Beech
Recent news in the UK bears witness to the devastating effects of lies on those lied about. A 51 year old man by the name of  Carl Beech told the police complete and utter fabrications about a number of high profile people, and now that their names have been cleared they and their families have been telling the media their stories.

Here are just two examples of the devastating effect of lies. 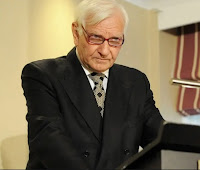 Harvey Proctor, a long serving honourable member of parliament, said that Beech's "false and malicious lies" had caused "ordinary people to revile and despise" him. He accused the  police of "misconduct" over their handling of the investigation. Although utterly innocent of the accusations made against him by Beech, Proctor lost his job and lost his reputation. He also lost respect for the police - quite understandably -  who believed the false allegations.

That's the problem with lies. Our human nature - fallen as it is - so easily believes the worst.  The moment malicious lies are spread, there's no taking them back, the damage has been done.

People will inevitably say "there must have been a little fire with that smoke." 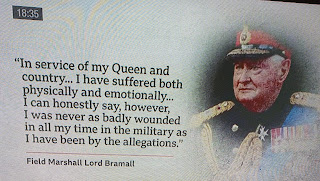 Example 2: Lord Bramall
I took this photo of my TV screen the day Beech was put away. It's my second example - Lord Bramall, an honourable man who says that he was more wounded by Beech's lies than all the scars of a life time of real-time battle!

That is some powerful statement. The conflict of military service did not hurt him as much as the outcome of lies.

"Sticks and stones may break my bones but words can never hurt me" is frankly, baloney!

Anyone who has felt the sting of false allegations will concur with the witness of these two examples. It is a most serious thing to make up and then spread lies about another. God says,"Lying lips are an abomination to the LORD." (Proverbs 12:22) Why? Because lies ultimately come from the pit of hell. Satan was a liar from the beginning and is the father of all lies.

Carl Beech has been put away for 18 years. Of course in England that doesn't mean 18 years at all, it could mean much much less.

The suffering of Jesus
One of the most painful aspects of the emotional suffering of the Lord Jesus must have been the lies told about him. His response was full of wisdom - he said nothing. Why? Because to every response would come another barrage of lies. Jesus left justice with God's ultimate tribunal at the end of time, at which he will preside as The Judge.

And we too can leave lies told against us to the last day, when perfect justice will reign.
Posted by roysummersblogspot at 21:57 No comments:

This summer, my son's strawberry plants have not produced many strawberries. The reason, we were told, is that the plants are a little on the old side, and what we need to do is to allow some of the “runners” to root into the ground thus producing new plants which next summer will produce a fresh crop of strawberries.

New churches produce crops, old churches often don't
There is a statistic out there which shows that the older a church is, the less good fruit it produces. There are a 1000 reasons for this. One is that churches rapidly turn in on themselves, become traditional, lose their edge, their zeal, their purpose. When older believers are involved in this process, the possibility of change - necessary in any rapidly changing culture – diminishes, and the church can so easily fossilize.

What is needed is for the mother church to encourage a "runner", a new plant and then when it is rooted itself, to cut the chord and let it go.

Letting go
It's this last point that sums up the wisdom of the New Testament, and it can be a hard thing to do. After Paul has planted a church, he lets it go and moves on to plant another church. He does not form a denomination, he does not form a rigid association, but lets the churches go - which means, of course, that he allows the Spirit of Christ to lead them, and the Chief Shepherd to guide them.

Paul trusts the Holy Spirit far more than we do. Of course should the infant get into trouble, he'll write them a letter, advise them and so on, but otherwise, they are "on their own.” Of course, they are not on their own - at all.

The dread of denominations

There are fewer more drastic errors in the history of the church than the formation of denominations which were formed for good and bad reasons. The good reasons were to facilitate fellowship and help across likeminded churches. The bad reason? The prideful desire to control and the desire for conformity. This last one, the desire for conformity, is strange, since Creation bears witness to the vast diversity of the Creator’s handiwork. The beauty of the true church of Jesus Christ is that every local church looks different from every other church. Visit false churches, such as those belonging to the Jehovah's Witnesses, and they all look the same - even the buildings are similar. But visit the churches of the New Testament and they are all different. The same essential components, yes, but done in different ways.

So there you have it. Plant a new church. Then let the church go, don't try to shape it and avoid the prideful instinct to control it.  Watch what the Spirit of God does. Just as fathers and mothers are often challenged by their kids,  mother churches often learn and are refreshed by their church plants.

Posted by roysummersblogspot at 09:20 No comments:

roysummersblogspot
I am the pastor of a medium size (in UK terms) church in Worcester, England.